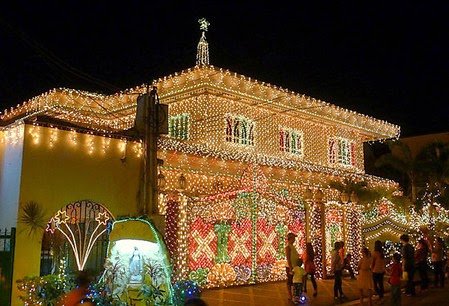 
According to the unofficial Philippine holiday calendar, Christmas season has started way back in September 1 and will last until The Feast of Three Kings in January.

Feeling Scrooge-y even if it’s already the second of December? You might want to visit these Christmas-themed destinations to stir up the merry holiday feelings within you. The unique charm of these places is guaranteed to take the Grinch out of you.

It has been a tradition of Filipinos to decorate their houses with Christmas lights as soon as December kicks in. But one street in the metro took the practice to the next level, way high enough for them to be recognized by the Department of Tourism as a tourist destination.
On Policarpio Street, Mandaluyong, houses are dressed up with a more than usual number of Christmas lights. One house in particular, aptly named House of Lights, is literally covered with Christmas lights all over. Another popular Policarpio destination, the House of Santa, has Santa Claus in all forms and sizes looking over its balcony.

Non-residents are welcome to stroll down the street and have their photos taken at the facades of the glittering houses. After picture-taking, you might want to browse the selection in the neighborhood’s tiangge.
Photos by leahdeleon.com
Scrooge the Musical
OnStage Theatre, 2nd Floor, Greenbelt 1, Makati City
No Christmas can be complete without reading or watching any rendition of Charles Dickens’s A Christmas Carol. You’re in luck because as a holiday season treat, Repertory Philippines is running their adaptation of Leslie Bricusse’s 22-year old Scrooge the Musical.

Scrooge the Musical tells the story of old miser Ebenezer Scrooge, who on Christmas Eve, is visited by the ghost of his late business partner and the ghosts of Christmas past, present, and future. As the night unfolds, Scrooge undergoes a profound transformation.

Miguel Faustmann and Chinggoy Alonso will alternately play the role of Ebenezer Scrooge. The show is around two hours long and will take you into a roller coaster ride of emotions (cheery, spooky, sad, guilty, and warm and fuzzy). Watch this show with your family to get a renewed sense of what Christmas truly means.
Schedule: Scrooge the Musical will run until December 14, 2014 with shows on Fridays and Saturdays at 8:00 p.m. and matinee shows on Saturdays and Sundays at 3:30 p.m.
Ticket Prices
Gold (Reserved Seating) P 1,042
Silver (Free Seating) P 729.40
Bronze (Free Seating) P 416.80

Festival of Lights
Ayala Triangle, Makati City
Free admission
Witness the park as it transforms into an extravagant spectrum of dazzling lights and carols every 30 minutes, from 6 PM to 10 PM. The show is FREE for everyone to marvel at.

This year, witness the journey of the Three Kings in the 12th Christmas on Display (COD)in Greenhills Shopping Center. The COD will run on a daily basis until January 4, 2015, with the show lasting approximately 15 minutes, from 6:30 PM until 11:30 PM. Admission is free.
Along with the annual Christmas on Display in Greenhills, the Christmas Night Market (November 15, 2014 to January 4, 2015), featuring shopping and dining delights will be open. At the same time, the Christmas Bangketa Fair will run from November 15, 2014 to January 4, 2015.
Nutkraker: Pasko na Naman Muli by Ballet Philippines
Aliw Theater, CCP Complex, Pasay City
Nutkraker: Pasko na Naman Muli combines excerpts from The Nutcracker and original choreographies set to the tune of Filipino Christmas carols. The first half of the program centers on Act II of The Nutcracker, featuring an enchanted land of dancing dolls and giant rats, a nutcracker that turns into a prince and the glamorous Sugar Plum Fairy. The second half showcases a medley of Filipino Christmas carols performed in dance. Following Ballet Manila’s previous holiday crowd-pleasers such as Belen and Kutitap, this suite is again inspired by familiar themes and traditions close to the Pinoy heart such as the Noche buena, Simbang gabi, gift-giving and family gatherings.

Shows are slated on December 5, December 6 and December 7. For tickets and other inquiries, please contact Ballet Manila at (63 2) 525-5967, (63 2) 400-0292 or e-mail at info@balletmanila.com.ph.
Casa Santa
276 San Jose Ext., San Isidro Antipolo City
Telephone No.: 584-3199
Fax No.: 69740-77
Cellphone No.: 0917-8912208
Email: info@jardindemiramar.com
Ticket: P180/person, minimum 5 pax
In the heart of Jardin de Miramar in Antipolo, Casa Santa is owned by businesswoman Ms. Edna del Rosario who prefers to be called Auntie Santa. The gallery that houses all her Santa collections used to be a vacation house. In hopes to share the joy she finds in collecting toys and statues of Santa Claus, she opened the house to the public and named it Casa Santa. To date, Casa Santa has over 3,000 Santas in every imaginable size and configuration.

Giant Lantern Festival
San Fernando, Pampanga
Every year, since 1908, San Fernando, Pampanga, the Christmas Capital of the Philippines, hosts a festival of lanterns, called Liligan Parul.  The highlight of the month-long festival will happen on December 13, 2014, 7PM at Robinsons Starmills, where giant lanterns that are almost eighteen feet in diameter, and each with an average of 5,000 light bulbs, will be displayed. On this day, several barangays will compete for the title and glory of having the best parol.

Giant Parol Show
The Plaza, 2F Newport Mall
Nightly | 7 PM Onwards
Until January 15, 2015
No time to go to San Fernando? Fret not. Manila has its own version of the lights festival in Resorts World. Its giant fiberglass lantern measuring 18 feet in diameter and equipped with 2,000 light bulbs, is a creation of master artisans from Pampanga. Admire the giant parol’s display of dancing lights using cutting-edge automated sequence technology every night at 7PM.

Photo from Century City Mall's Facebook Page
---
Do you know where else should we lead the Scrooges this Christmas? Share your favorite Christmas destinations with us, in the comments section below.

Makati is a nice and beautiful place to visit touring guide