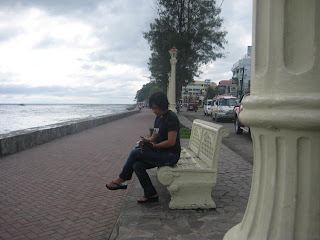 One cannot simply miss The Rizal Boulevard when in Dumaguete City, a 780-meter strip of wide beachfront promenade. It runs almost entirely along the city’s commercial district and provides quite a refreshing and calming view when dining or having a drink at one of the many restaurants or bars lining the street.

Rizal Boulevard.It is a popular spot for family picnics and other outdoor activities. On Sundays, you can usually find revelers seated cross legged on the grass around their spread of food. Children have their time of day running around or clam digging on the seashore during low tides.

On many occasions it becomes a venue for celebrating city festivals. During the day, the streets hold parades and dances while banca (sailboat) racing goes on at the beach. In the evening, it becomes a native food market. The wonderful aroma of grilled seafood and barbecue permeates the sea air. A band performs nearby while the beer continues to flow.

A quiet night outside on full moons calls for a romantic stroll after a taste of the boulevard’s action-packed night life. It is just a perfect way to end a pleasant evening soiree.

The Rizal Boulevard is undoubtedly one of the most visited places in the city. It was named after the famous Philippine national hero, Dr. Jose Rizal, who actually made a stopover here on his way to Dapitan where he was put in exile. 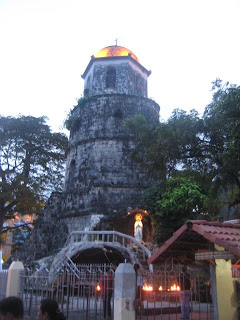 Dumaguete BelfryThe bell tower of St. Catherine of Alexandria Cathedral was constructed in 1811. Other than informing townsfolk of daily mass schedules, it also served as a watchtower for forthcoming attacks by aggressors.

The Dumaguete Belfry was restored in 1985 and since then has become a very popular landmark. A garden now surrounds the tower and a grotto of the Virgin Mary stands erect near the base. Devotees flock daily to light a candle for their prayer requests or for confirmation of their faith. 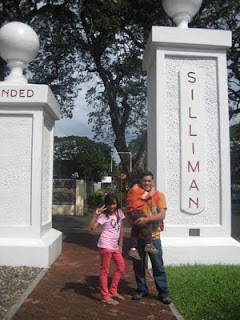 The pride of Dumaguete, Silliman University is a vast 60 hectare land located at the very heart of the city. Built in 1901, it first started with less than 10 students and a makeshift classroom. Today it is one of the best and biggest universities in the Philippines.

The Silliman Hall is the oldest known building in the campus. It was erected in 1903 when the need for additional classrooms arose. Today, it serves as a museum and a venue for university dinner conferences and the like.

In the year 1978, construction began for this 3 storey building using funds donated by the USAID foundation or the United States of America through the office of American International Development. It was finished within one year, and formally inaugurated on August 28, 1979. It still remains to be one of the biggest libraries in the Philippines.

Once the City Mission Hospital, Katipunan Hall is now converted into classrooms and educational departments. Interestingly enough, much of the hospital’s original structure has been retained.

The Mission Hospital was first opened in December of 1915 by Dr. Langheim and his nurse-wife who were the pioneers of medical missionary work in Negros Oriental. Both were also educators at the school.

In the bustling downtown area is the city market filled with tiny stalls and rows of tables stacked with local fresh produce.

Meat and vegetables are usually freshest in the early morning hours. Fishermen from neighboring towns also bring in their catch during this time.

The public market could be a bit noisy and a tad cluttered because of so many people coming in and out of the building. Other products that could be sourced from there include pots and pans, baskets, brooms and other cleaning agents, plastic products, rice, livestock feeds, even freshwater pearls, watches and gold jewelry.

The proximity of Angtay Golf Club makes it convenient for all golf enthusiasts in the city to practice their swings after work at the office. In the late afternoons, it is a common sight to find junior golfers lining up for training sessions as well.

With the 9-hole course, Angtay Golf Club has a function room and a restaurant serving good food. It is also a perfect setting for wedding receptions and children’s parties. It has a spacious parking area with security guard.

Each year for the past 18 years all the young and the young-at-heart flock to the bedecked Spanish mansion of one Dr. Rico Absin, a practicing anesthesiologist in his early 50s, who has successfully created an institution out of a genuine passion for art and decoration.
No comments: 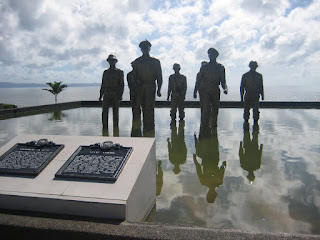 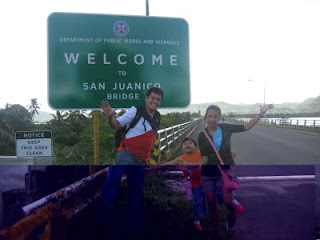 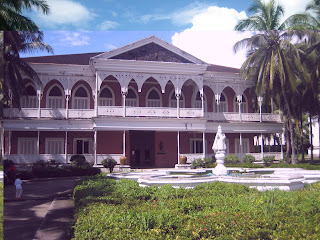 Tacloban City is the largest city and regional center of the Eastern Visayas region of the Philippines. It is also the capital city of Leyte. It is the center of commerce, tourism, education, culture, and government in the region. Tacloban is located on Cancabato Bay, in the San Juanico Strait which divides the islands of Leyte and Samar. According to the 2000 census, it has a population of 178,639 people in 34,758 households.

Strategically located at the heart of Eastern Visayas or Region 08, Tacloban City lies along the northeastern side of the island of Leyte. Tacloban`s location and accessibility have made the city the commercial, educational, government and political hub as well as the tourism service center of the region. Tacloban City is 360 miles southeast of Manila. It is situated approximately halfway the entire length of Maharlika Highway running from Northern Luzon to Southwestern Mindanao making it a perfect place fro road-weary travelers to unwind.

In Tacloban City we have sparkling jet-black sandy beaches, warm climate and even warmer people. For those who are ready to do something, an indoor artificial rock climbing facility is located within the city center. We also have tennis, golf, billiards, mountains biking, rock climbing, mountaineering, kayaking, disco, karaoke and cockfighting to name a few. The place is also for windsurfing and jet skiing with the abundance of water surrounding the city. For scuba diving enthusiasts dive sites are just a few minutes drive away across the San Juanico Bridge to the mysterious and beautiful island of Samar. Spelunkers will find the Sohoton Caves in nearby Basey, Samar both a challenge and an adventure.

Bodies of water that surround the city are Panalaron Bay and Cancabato Bay. On its eastern shoresis the San Juanico Strait - reputedly the narrowest navigable channel in the world. On the southern side the city is flanked by the waters of San Pedro Bay stretching towards Leyte Gulf - the arena of the biggest naval battle in the Pacific Theater during World War II.

As a service center of the local tourism circuit, the city has an array of conveniences, supplies and support facilities for visitors. Points of interest under this circuit include historical places that is in a way connected with the events during the liberation of the Philippines.
No comments: 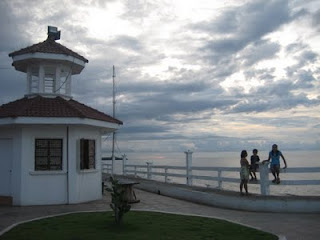 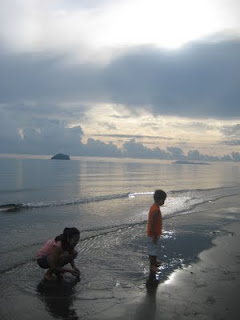 The City of Roxas, once known as the municipality of Capiz is the capital of the province of Capiz.

In 1569, Captain Diego de Artieda who was sent by Miguel Lopez de Legazpi from Cebu, landed on the town of Pan-ay and proclaimed it as the capital. Later the capital was moved to its present site upon discovering that the town of Capiz was near the sea where they can have better docking facilities. The Spaniards saw the long coastal cover and envisioned a trading and shipping center. Ports were constructed in Libas and later in Culasi.

A river meanders across the town, cuts it at the heart and divides it almost equally into two. Tributaries from the mountains flowed into the head of Panay River through settlements formed along its shores, irrigating and fertilizing the land to provide food to the people. Following its course into the sea, it provides water to fishponds during high tide.

In 1590, the Navy of Acapulco, Mexico made Capiz port its arsenal (naval yard) where they can seek shelter when the sea was rough. Capiz then eventually grew into a bustling port and several houses of stones were built. The social and political status enjoyed by the native chieftains of Capiz often resulted in mixed marriages with the Spaniards. The mestizo descendants became the base of the principalia or influential citizens. Their privileged positions allowed them to build houses around the favored square of the poblacion - around the church and the government complex.

Their children became the beneficiaries of the Augustinian mission in 1593.

In 1746, Capiz was made the seat of the politico-military government, although it was ecclesiastically controlled by the Bishopric of Cebu. In the latter part of 1795, under Gobernadorcillo Miguel Bautista, the old road to Baybay Beach was built as an extension of San Roque Street.

The town of Capiz was frequently attacked by Muslims that in 1814, stone forts at Baybay Beach (Baluarte) were built through the initiative of Gobernadorcillo Jose Consolacion.

In 1870, the ground was broken for the foundation of the Cathedral of Capiz under the guidance of Reverend Apolonio Alvarez. It was built by sturdy hands, sweat and blood of Capizeños who were victims of forced labor.

In 1876, the diocese of Jaro in Iloilo was erected and Capiz came under its jurisdiction. In 1877, the cathedral was finally finished. Prior to its construction, a chapel was built in Burgos Street beside the municipal building.

Economic debacle hit the town of Capiz in 1914 when the Ayala Distillery grounded to a halt. What could have been an ambitious forerunner of nationalized industrialization became the victim of the Internal Revenue Law under American control.

In 1917, Division Superintendent of Schools F.E. Hemingway founded Capiz Trade School for intermediate pupils and offered woodworking as the only vocational course. The next division superintendent opened Capiz High School.

On February 15, 1951 the diocese of Capiz became a separate ecclesiastical jurisdiction from Jaro. Its first bishop was Msgr. Manuel Yap. In the same year, former Vice Mayor Libertad Conlu became the first female mayor of Capiz.

Capiz became a chartered city on May 12, 1951 through House Bill 1528 sponsored by Ramon Acuña Arnaldo, the representative of the First District of Capiz. It was approved by President Elpidio Quirino on April 11, 1951 as Republic Act 608. Consequently, the town was named Roxas City after her greatest son, President Manuel Acuña Roxas, the last president of the Commonwealth and the first president of the Philippine Republic.

The first appointed mayor was Lorenzo Acuña Arnaldo followed by Ramon Berjamin Blanco, Jose Dorado and Juliano Alovera Alba. In 1959, Lorenzo Acuña Arnaldo again became the head of the city as the first elected mayor. The next mayor was Teodoro Roxas Arcenas who was succeeded by Juliano Alovera Alba who was also the representative of the First District of Capiz at the House of Congress when Martial Law was declared.

Hon. Antonio A. Del Rosario, who is now the Congressman of the 1st District of Capiz, was elected to three terms as mayor of Roxas City, serving from 1998 to 2007.

Hon. Vicente B. Bermejo, who is the former governor of the province of Capiz, was elected mayor and served for three years, from 2007 to 2010.

The incumbent mayor of Roxas City is Hon. Angel Alan B. Celino, who also served as Vice Mayor of the city from 2004 to 2007.

The most notable people of Roxas include:

Manuel Acuña Roxas - First president of the independent Republic of the Philippines
Josefa Abiertas - The first woman bar topnotcher and proponent of the Women's Suffrage Bill
General Esteban Contreras - Fought for the freedom of the Capiznons, was never captured by the Americans.
Jose "Tabai" Altavas - Municipal Councilor of Capiz (1903 – 1906); member of the provincial board of Capiz (1906 - 1907); Delegate to the First Philippine Assembly (1907 – 1909); Provincial Governor of Capiz for two terms (1910 – 1916); Senator from Iloilo, Capiz and Romblon (1916 – 1922); and Representative from the second district of Capiz (1925 – 1928). He was a member of the “goodwill” Legislative Delegation to Japan in 1917 and was elected Delegate, from the first district of Capiz, to the constitutional convention in 1934.
No comments: